Here! Photos from the stage of the last two JAMA gigs:

Both awesome, Harbourside more so because as we played a thunderstorm rolled in and at the end of our set everyone got annihilated by buckets of water.

Two gigs with JAMA in the last month, and I’m starting to notice a bit of a trend; initially we’re met with quite a cool reception. The first few songs are solidly in “White people playing black music” territory – despite having Senegalese, Indian and French musicians, it isn’t until Cecilia, our much-loved Zimbabwean singer, takes the stage that anyone really starts to loosen up. It never takes more than a few songs for her to get people dancing but what always interests me is how perceptive audiences can be. I saw a band called Future Dub Orchestra at the start of July, and they were a prime example of all the right elements being in place and yet any sense of authenticity was completely missing; it struck me as a band that gets together once every two weeks to rehearse music that one guy writes, then plays wherever this guy books a gig. This is fine but there was no chemistry, no life or energy that made me feel that these people loved what they were doing, and this is something that I think people see in JAMA before Cecilia comes onstage – we are all proficient musicians and well-rehearsed but for the first few numbers we appear lifeless and this is just not okay. I didn’t decide to be a musician to stand onstage and shy away behind a speaker cab, the point of being on a stage is to be seen and heard and engage with everyone watching you, and if you can’t do that then something is very, very wrong.

TL;DR: Don’t be dull when onstage.

The last few weeks have been filled with evening recording sessions. The fruit of this is below:

Here it is, the reason for treason itself: the Diezel Einstein! 50W of pure English electricity powering six (yes, six!) 12AX7s and a pair of EL34s. A Celestion V30 mounted in a custom-sized Zilla cab beats the fear of God into the air and sends it flying out across the room. Truly awesome amp, awesome sounds. 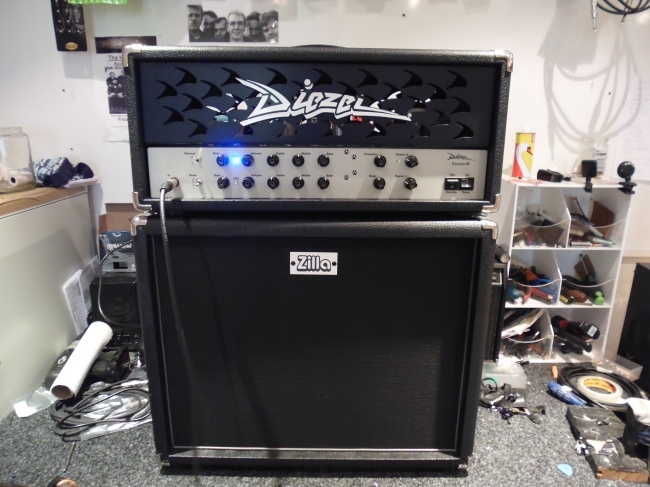 The channel switching works in a different way to most amplifiers. There are three “Modes” of the preamp: Clean, Crunch and Dirty. There is also a second switch which takes you to channel 2, and channel 2 is your “lead” channel. Each channel has it’s own 3-band EQ, gain and volume controls and so you can configure your two channels however you want. I was worried that you would be restricted in the sounds you can get from this (i.e only clean/crunch or crunch/dirty available on the footswitch), but the channel 2 boost is so great that even on Clean the switch to channel 2 gives you enough dirt to be going on with!

Basically it’s awesome. I’m glad I got it. 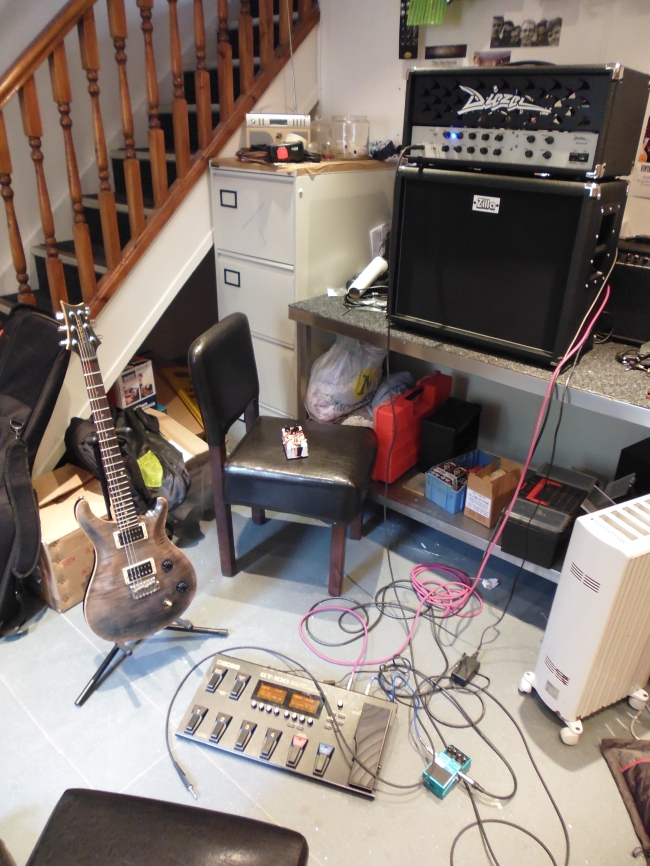 Some recreational Sunday afternoon guitar playing. Notice the lack of pints; the pub next door was closed.

I’ve also been meaning to put some photos of anything interesting that comes through the shop, and this week there have been a couple. A chap brought in a MIJ Strat from ’89/’90 in pieces (and I mean in pieces. The only thing attached to the body was the neck). After a day under the hood with a soldering iron I got it looking like this:

All in one piece (ish). More to the point, all seems to be working electrically; this is one of the few times I’ve had to actually re-wire something properly rather than simply solder things back on where they’ve fallen off, and it took ages to stop getting it wrong!

And here’s what happens when you don’t learn to pick properly! This is the front of a Faith Jupiter that a kid bought a few months ago. Somehow his picking technique leads him to pick through the strings, lacquer, paint and into the wood. Claims that this was due to a “defective paint job” were met with raised eyebrows. 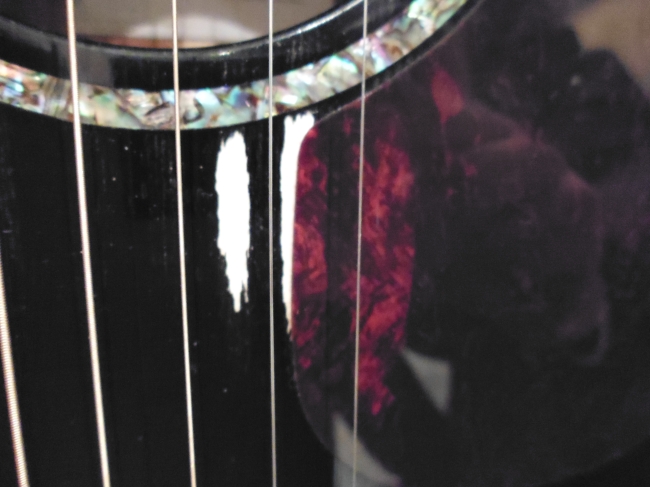 In an effort at damage-control I’ve fitted this lovely tortoiseshell pickguard. Note the pale blob under the E string beneath the pickguard; that’s another, bigger hole.

I picked up a cheap power sander and jigsaw combo from the local charity mart a week ago, and made use of the fine weather this week to remove the paint from my old Squier strat. And by God let me tell you that paint did NOT want to come off! 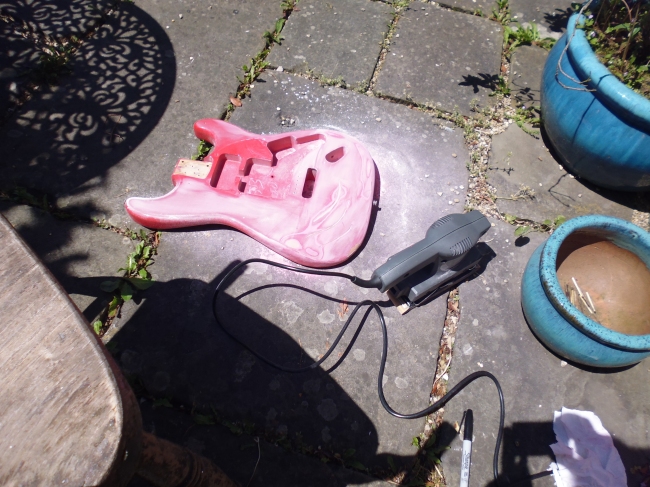 After an hour and six sheets of paper.

Another hour and one super-coarse sheet later.

Done! Proper nasty job. Eventually I’m going to refinish and re-equip this guitar with some nice pickups, maybe a new neck and some trimmings.

This is a DSI Mopho.

The black box is a Sonuus G2M Analogue-MIDI converter; the MIDI data can be interpreted by the Mopho and so the beautiful analogue goodness contained within can be played with a guitar. This is very similar to what I’ve been doing with the G2M and VSTs on my laptop but since the Mopho is standalone I can use it more reliably live.

I had occasion to travel to London yesterday to put some money down on a new amp (more on this later), and with the few hours I had spare I took a trip to Denmark Street, London’s famous home of the guitar. I’ve heard many different opinions on the quality of the shops but it’s impossible to dispute the quality of their instruments:

Note some serious high-end Ibanez and ESP guitars! This is with my back to the dozen Les Pauls lined up above the counter. 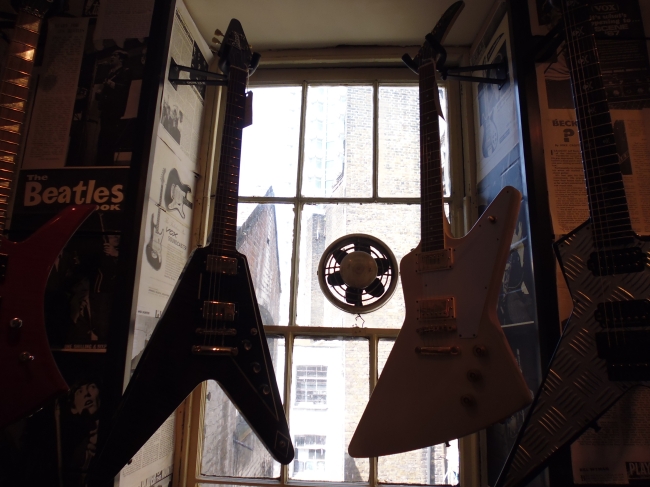 The most gorgeous Telecaster I’ve ever seen.

Delicious FX. Even these high-end shops seem to be all over Mooer pedals.

1979 LP Custom that very nearly caused me to make a Bad Financial Decision. Luckily I decided to eat and pay rent instead, but it was a close call!

All these pictures were taken in “Hank’s”, which I have to say was by far the best shop on the street. They had the nicest gear, the least ridiculous prices (though fairly optimistically priced) and decent guys working there. Every other shop had ludicrously over-priced gear (case in point being Vintage & Rare trying to sell a Westone Thunder 1 with a broken switch and replacement knobs for £395. I mean, seriously??), and keen assistants who only want “serious buyers” to touch their stuff.

Denmark Street is a great place to visit and you may find a real treasure, but I would advise anyone looking for a new or reasonably-priced guitar to look elsewhere.

Stay tuned for what I DID bring back from London 😀

Here’s me playing a solo I wrote for the song “This is the End”. Hopefully going to have this bad boy fully operational soon and ready for playing live 🙂

Given a sunny bank holiday afternoon in a closed guitar shop, I fired up the Marshall and picked a variety of Les Pauls to rock out with. Yee-haw!

So it turns out social media (and the manipulation thereof) is not my strong point. I tend not to take an awful lot of pictures and it’s rare that I finish something to the degree that I’m happy to promote it.

Still, this sounds pretty good to me:

It also turns out that despite Bristol being the thriving home of many a musician it is also a pain to get hold of real premium A-grade singers. However, (and it’s probably too early to be sharing her videos around in connection with this blog but, well, f*ck it) this girl has been in contact with us about being our singer:

A rare talent indeed. We’ll see what comes of it.

Here it is again, the iMoov MIDI controller app from Tangible FX. Featuring a brief overview of how the effects have been combined to make the sound, and a bit of “back-stage” footage of how the software is running. Not that in-depth, but that is to come later.